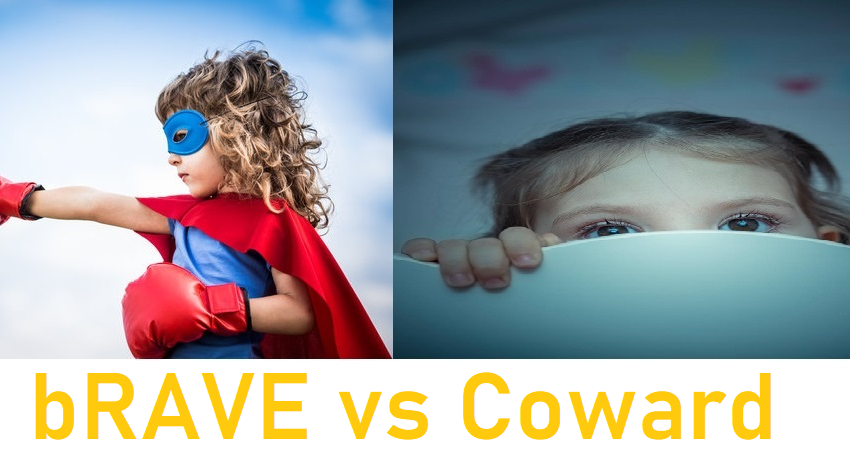 ‘The World Has No Room For Cowards’ , truly quoted by Robert Louis Stevenson, a well known essayist and poet. Cowards die many times but live longer lives. But the question that arises is – Is it a life worth living?
Shakespeare said, “Cowards die many times before their death; valiant taste the death just once”. Cowards are those who fear the struggles of life and contrary to them are the brave who come to the forefront in the struggle of life. Cowards lack bravery, but the fearless fellows do not fear the struggle.

They fight with a determined mind and courageous attitude. They always maintain patience and have a hope of success. They know that ‘human wisdom is summed up in two words – wait and hope.’ It can be said that cowardice and bravery are two sides of the same coin.

How do then, cowards die many times and still live longer lives?

To understand this, a contrast between yellow-belly and valiant is very important.
An example can be taken from the poem ’Swimmers’ written by ‘Louis Untermeyer’. The poet goes to the sea to have a dip in the water. The waves of the sea attack him from all sides. He fights with the turbulent waves bravely. His struggles with the waves symbolize struggles in life. He gets invigorated with zeal, valour, vigour and vitality. Had he been a coward, he would not even have tried to battle the waves.

Sadly, people who lack bravery, never try to make an attempt in the struggle of life. All the problems and frustrations of life overpower them. Their minds get preoccupied by tensions. They are unable to solve their problems. They then usually fail in every field of life. That is why cowards ‘die many times’!

Read Also : Have You Ever Tasted the Dolma Aunty Momos

In a bright contrast, courageous people never give up hope in life. They always try to come out of problems. They don’t give a chance for frustrations to overpower them. They always keep up pace with time because they know that ‘Time is the greatest innovator.’ They come in the forefront to face the difficulties boldly, but the cowards always remain behind. The brave men never bother about their lives but the cowards are always bothered about their lives and self benefits. So, they ‘live longer lives’ because they do not come to the forefront to face the world. They fear defeats but the valiant people know that ‘defeat is nothing, but a step of attaining better.’

The difference that lies between brave and yellow-belly is the difference in their attitudes towards life, the variance in the way they face the challenges and how much self-confidence they have. Cowards lack self confidence but the brave know that:

‘Self Confidence is a quality great
It can help you well to make your fate
Know your failings one and all
With an Iron will overcome them all
Think always “I will, I can”
Become a truly self-confident man’

I think fearlessness and cowardice are not God-gifted. They are generated in the blood of the brave by their own persona. The choice depends on us, but we must never forget the words of Swami Vivekananda: “Never lose faith in yourself. You can do anything in this universe. Never weaken…. All Power is yours.”